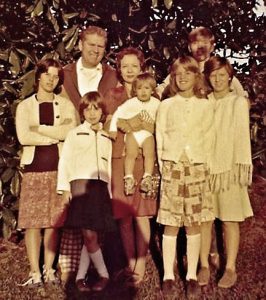 In the summer of 1971, Wayne and Nina Fleming, along with their five children, left Ocean Springs Mississippi, where Wayne had been pastoring a growing church, for the Rio Grande Valley to prepare for a ministry with Spanish-speaking people in the United States. A few years earlier a representative of the Home Mission Board of the Southern Baptist Convention had advised them that missionaries were needed in this area of the United States more than anywhere else. The Flemings felt that the Lord was leading the in this direction. However, after applying with the Mission Board, they were told funds were insufficient to send them to language school, and that they would need wait until further notice. Not believing the Lord wanted them to postpone their leaving, the Flemings made a fast trip to the Rio Grande Valley to check out a faith supported language school in Edinburg, Texas they had heard about. The Lord provided miraculously the ways and means, and they soon found themselves settled in Donna, Texas, where Nina found a job teaching school and Wayne commuted to language school. During that school year of intensive study, the Flemings joined a small Spanish church. This served not only as an opportunity to serve, but it also was a perfect way to learn more of the Mexican culture. The Lord was leading, step-by-step.

After Wayne finished language school, he was called as pastor of the Spanish church, the previous pastor having resigned. By this time the Flemings had become acquainted with other missionaries in the area, and had made occasional trips into Mexico with some of them. The Lord used these trips to burden their hearts for the thousands of Mexicans who had never heard the true gospel message. Yes, most of them believed in a form of God and had their religious superstitions and traditions, but they didn’t have the joy and peace that comes from having received Christ as their personal Savior. There were a few missionaries in the larger cities of Mexico and a few evangelical churches, but the small “ranchos” (villages) had largely been untouched by the gospel. The Lord gave the Flemings a special love and compassion for these precious souls, many who were very afraid to change from the “religion of their fathers”, but nevertheless would flock to the outdoor services to see an evangelical film Although, at that time, the invitation was given in poor Spanish, many would respond to receive Christ as Savior. This encouraged the hearts of the missionaries, and so they applied to the Foreign Mission Board for appointment.

However, because of the number of children they had, and the fact that three were foster children, one being a teen-ager, they were not accepted for appointment. In spite of this, the Flemings felt the Lord was giving them the “go” signal, so they moved to Mexico by faith, believing that the Lord would supply their needs. In the summer of 1973, they located in “El Cerrito”, a small village near the city of Allende, Nuevo León (Northeastern Mexico). They chose this village because it was the only adequate available housing they could find at the time near enough to visit regularly in the village of Valle Hidalgo. They had visited this village while in Texas and had already obtained permission to hold services there in a villagers yard. Before the move was made into Mexico, the Lord had provided monthly support of about $200 through two churches, one in Tennessee and one in Mississippi. Gradually through the years, the Lord has laid the burden of support for the ministry on the hearts of other fine churches and individuals. He has always been faithful to supply whatever need has arisen.

The Flemings did not have national workers during those early years, nor was their Spanish very good, so the work began rather slowly. Their children were a blessing to them, and at an early age they began to take an active part in the ministry (Tera, their youngest child, was born in Mexico). They quickly learned the language, made friends, and invited them to visit their home and the services. In later years they taught in Sunday School, led in child evangelism classes, led the music, organized a choir, and provided music with an accordion.

In the beginning of the ministry, services were often held in the yard or living room of the missionaries’ rented home. The owners of these homes, being of another faith, did not appreciate this. Therefore, they averaged moving once a year for the first six years. However, the next eight years they were fortunate to stay in the same location, and then finally they were able to purchase a piece of property and build their own apartment.

The Flemings continued holding open air meetings, showing films, giving simple gospel messages, handing out gospel tracts, and teaching by means of visualized stories and songs until there was a sufficient number of converts to begin a church building program. Since the people they ministered to were very poor, they knew the Lord would have to supply through other means. As always, He was faithful and through Christians in the U.S. extra money began to come in as a direct answer to prayer. Thus, they built their first building in Valle Hidalgo in 1973.

Through the years several mission minded churches have sent teams who have come to help or send materials for VBS or block parties. These groups usually send or provide handwork, prizes, games and refreshments. These serve to attract many who would probably never go to a regular church service. Other groups come at various times to help with construction and/or painting, do mechanical, plumbing or electrical work, etc. The main goal for these teams is in some way – directly or indirectly – to win souls to Christ.

Children have always held a special place in the hearts of the Flemings, so in 1999, after Wayne and Nina’s son Tim and his family joined the work, Bethany Children’s Home (named after Tim’s daughter) was opened to care for children who had been neglected, abused, abandoned or orphaned. Children of all ages have come and gone through the children’s home. Many that arrived as babies are now in school, some in college, some have graduated and have jobs and are now married with a family of their own.

After planting a church in the nearby town of Allende, Nuevo León, Tim, along with a team of leaders from this church planted another church twelve hours south in Martinez de la Torre, Veracruz and another in Fresnillo, Zacatecas. These are to be the base of operations for new church plants in these three states.

Much of the ministry’s growth is because of a third generation of missionaries. Wayne and Nina’s grandchildren, Davin, Jeremy, and Bethany are now grown and have become involved in all areas of ministry, from teachers and the pastorate, from direction to production. This has led to the growth of Mexico Missions Ministries’ vision: To plant and establish healthy churches in every state in Mexico that, in turn, plant healthy churches in each town and city in their state.

Since their humble beginnings the Lord has added many churches and a facility that is used for a missionary compound, camps, retreats, and conferences for children, youth, men, women and married couples. They also have a Center of Operations, which helps develop discipleship materials for all of our churches and is made available online for any other Spanish-speaking congregations around the world that want to use it.

The Mexico Missions Ministries team ask for your prayers for all the different phases of ministry and they thank the Lord daily for those He has touched to be a part of it in any way. Praise Him for His leadership and the privilege to serve Him. To God be the honor and glory forever!